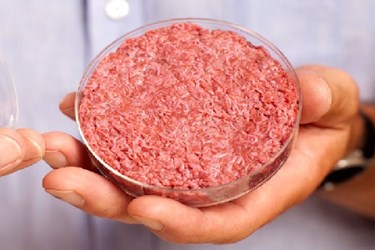 Test-tube produced meat, also known as “cultured” or “in-vitro,” could be the future of food.

Modern Meadow, one of the companies working toward developing test tube meat, held a tasting of what the company calls steak chips at this year’s South by Southwest Interactive Festival in Austin, TX.  Tasters described the steak chips as, “Delicious and similar to a thin piece of beef jerky that would be difficult to discern from real meat.”

Many consumers are still wary of a meat product that is grown in a lab, and the question of whether cultured meat products should be considered real or fake meat remains to be answered.  A recent survey by the Pew Research Center showed that 80 percent of Americans say they would not eat meat grown in a lab.  If this sort of technology gains footing, however, cultured meat could very well be the future of food.

Some biotechnology startups have been researching and developing alternative food products, like test-tube meat.  Beyond Meat is one such company that is producing “meat” from the plant protein in soy, peas, and apples.  The protein is heated, cooled, and pressed to resemble meat tissue.  The company’s “chicken strips” are available in 4,000 U.S. stores.  Hampton Creek Foods is also looking to plants, but rather than a meat substitute, the company is trying to create a plant-based egg substitute.  Rosa Labs recently started mass production of a drink supplement that is aimed at meeting all of the body’s nutritional needs.

Alternative food has also caught the interest of Google cofounder Sergey Brin, who was one of the financial backers for the world’s first ever lab-grown hamburger, which was served to food critics in London last August.  The production of this one burger cost about $325,000, underscoring the fact that mass production of lab-grown meat is still far from viable.  The high cost, in conjunction with manufacturing complexities and federal regulation, means cultured meat is unlikely to be the food of the near future.  The largely negative public opinion on the issue and the controversial nature of meat grown by scientists in a lab further lower the chances of test-tube meat being widely available — or even accepted — any time soon.