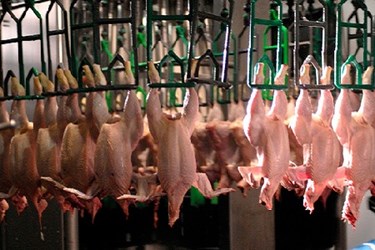 A decision was made 15 years ago to adopt HIMP, a pilot program designed to upgrade an inspection process in chicken slaughter plants first adopted in the 1950s

The National Chicken Council recently released an infographic as a way to more simply illustrate the changes from the traditional inspection system to the modernized chicken slaughter inspection system. At the center of a storm of controversy, the Food Safety and Inspection Service (FSIS) and the US Department of Agriculture (USDA) are being criticized for putting the public’s health at risk. But is that the case? There is no definitive proof to that affect, though there is a lot of finger pointing and negative press surrounding the implementation of this new inspection system.

What Are the Differences?

The traditional inspection system, the one currently in place has:

The modernized inspection system, currently being field tested has:

The biggest differences, at first glance, are the obvious lack of FSIS inspection stations, which may be alarming at first glance. However, the number of inspection stations is not reduced. Instead, the people performing the inspections are provided by the plant, not the federal government. Is this a case of the fox guarding the hen house? Not likely, when there is an FSIS inspector walking the line, overseeing the inspection stations, and performing more food safety-related tasks, such as microbiological testing. Additionally, the number of FSIS spot checks is increased from 20 carcasses in the traditional system to 80 carcasses in the modernized inspection system, a substantial improvement.

The traditional system has been in effect since the 1950s. Since that time, production has increased, more plants are operating, and processing changes have occurred. Why not revamp the inspection system? The success of the pilot program, the Hazard, Analysis and Control Point (HACCP)-Based Inspection Models Project (HIMP) has been in place in 20 chicken plants since 1999. The program has been studied and picked apart for 15 years now. It has been found to be effective and in keeping with the USDA’s safety standards. Plants are now voluntarily able to adopt this new inspection system and the proposed new rule is out for public comment at this time. The goal is to improve food safety while protecting the workers, but does not in any way hamper the final outcome, which is to apply the same rigorous safety standards across the board. All of the chicken products must meet or exceed the USDA’s safety standards.

In a blog entry, first published in April 2012, FSIS Administrator Alfred Almanza explained that the traditional inspection system concentrated on finding “bumps and blemishes” during a “visual” inspection of the carcasses. He went on to state that these bumps and blemishes were not an indication of the safety or health of the carcasses being inspected. Almanza iterated that instead, it was the Salmonella and Compylobacter pathogens, those things an inspector cannot discern with the naked eye, which is the real threat to public food safety. Citing the advanced scientific knowledge now in place, he defended the need for the modernization of the chicken slaughter inspection process.  The new process seems to be much in keeping with the FDA’s newly defined mission. FSMA’s focus is the prevention of foodborne illness, rather than reacting to foodborne illness after it occurs.