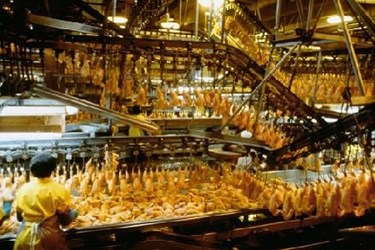 More than two years in the making and still being debated in federal court, the New Poultry Inspection System is just weeks away from becoming reality

The USDA’s Food Safety And Inspection Service (FSIS) is implementing its New Poultry Inspection System (NPIS) beginning on Oct 20, 2014. Concurrently, Food & Water Watch (FWW), which filed suit last month, has been joined by other entities in a separate filing. The Southern Poverty Law Center (SPLC), the Center for Foodborne Illness (CFI), the Consumer Federation of America (CFA) and Nebraska Appleseed all provided input to the Government Accountability Project (GAP). GAP filed the documentation for the plaintiffs, while the USDA has filed its challenge to the claims laid forth. In short, the USDA’s opposition motion stated:

The collaborative amicus brief seeks a temporary injunction to prevent the new rules from taking effect. The rules of the NPIS have provided plenty of latitude for compliance. For example, Hazard Analysis and Critical Control Points (HACCP) programs, Sanitation Standard Operating Procedures (SOP), and other Prerequisite Programs all fall under the term HACCP. The final poultry rule requires that all poultry establishments develop and implement a written procedure by which to ensure fecal-contaminated carcasses do not enter the chiller. Facilities must also maintain written procedures on preventing contamination of chicken carcasses throughout the entire slaughter and dressing operation. These new procedures must be incorporated into a facility’s HACCP program(s), the old processes melding seamlessly with the new.

FWW has attacked the efficacy of the proposed new rule at every turn. FWW alleges that food-safety inspector shortages are endangering the public health, using the proposed Poultry Modernization Inspection rules as an example.  In fact, FWW has gone as far as calling it the USDA’s Filthy Chicken Rule. Under the new rule, the production line is reorganized. It appears to be allowing the fox to guard the henhouse by utilizing company employees at inspection points that were previously staffed by an FSIS inspector.

The facts, however, do not support the allegations. Yes, one less FSIS inspector will be required at each plant, but the number of spot checks by FSIS is increased. In addition, there are two strategically-placed inspectors, one at the end of the line, prior to the carcass release, which was not in place before. Add to that the three inspection stations provided by the plant, and you have more oversight than in the previous inspection system. The entire procedure is designed to allow more-complete microbial testing, rather than the less-effective, visual-inspection process currently in place. FSIS will be doing its job, smarter and more economically, while the plant will be taking its share of the responsibility for its safe food production.

Additionally, the NPIS is the first critical step in the FDA’s Salmonella Action Plan, a worthy plan that should be lauded, not derailed by misinformation. The USDA’s goal is to prevent the spread of foodborne illnesses through safer procedures. Preventing recalls, such as the one by Tyson in January and Foster Farm’s non-recall debacle this spring, is the primary goal of the NPIS. FSIS will begin implementation on October 20, transitioning through a phased approach. The USDA recognizes that it will not be an easy transition and will definitely require an extensive learning curve, for everyone involved.  FSIS has even provided a compliance guideline for training in-plant personnel.

Common sense says the government will not adopt a program that is less effective or will purposely put the public at risk, though past performance on other issues may color our perceptions. It’s time for a change and change can be good. We can no longer do business as it was done in 1957, when the previous poultry inspection rules were implemented. Poultry producers are feeding a growing world now. Look here at the U.S. and World Population Clock to put it all in perspective. The world gains one person every 15 seconds! The means by which we continue to provide safe food must evolve with the changing times. FSIS predicts the new Modern Poultry Inspection system will prevent up to 5,000 foodborne illnesses annually, just in the U.S.  That’s a good thing.